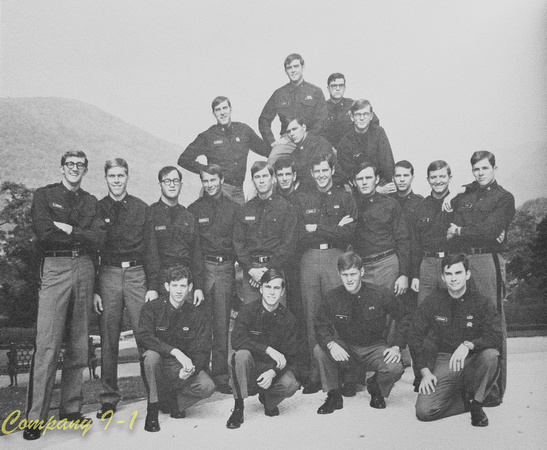 First Row: A. Neidermeyer, B. Fitzpatrick, B. Haig, B. Messinger.

Look out world, the wrecking crew from Iguana One is let loose on society as of 4 June 1975. From the little Texan Vic, to size 14 Mot, we spanned every gap. Barker could be found tromping around with the Boy Sprouts while Pinky was with his "babes." Our company had its share of jocks: Crazy George who'd been hit too many times in the head with a puck, Ace whose brain was soggy from too much time in the pool, N-meyer who did all that running and will keep on going once he's outside the gate, Lynn who'd shoot at anything that would move, Strick who would jump out of planes anywhere, Gerbs who was always out in left field. Huggies worshipped the forensic qualities, Manny was always with a fantastic" looking girl, and we even had the rag-men with Big Norm and Mohammed Lolli. Michael T. was out with his car while Brucie pushed papers (work, work, work). While "el Skull" was dividing his time between girls and the skit makers of Rabble Rousers, Inc., Pettit and Alligator were looking for the bottom of the bottle -- and the way home. Fitz, alas, was striving (always striving) and coined the phrase which described our class -- MAX!! So we're locked and loaded, and ready on the left and ready on the right watch out firing line we're on Rock&Roll!

"Sometimes you get the bear, sometimes the bear gets you" -- MAJ Dorland to Cadet Scully. . . Fall, 1971
© USMA Class of 1975
Powered by ZENFOLIO User Agreement
Cancel
Continue