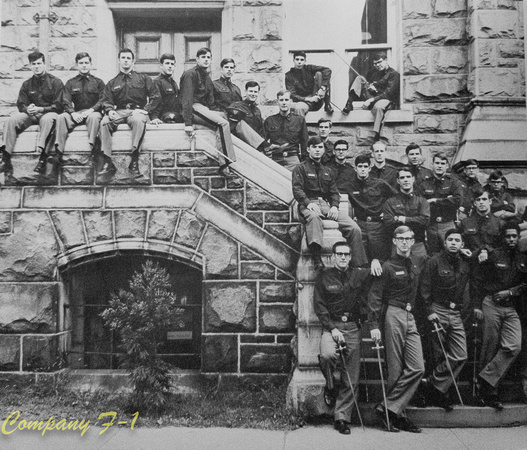 With the circus of clowns that made up 75's contribution to the Marching 100, it is truly a wonder that the sun still shines. (At West Point???) Smoking Joe will undoubtedly, be the Dean. Don't study, spec it. Billy gave things a whirl as a plebe, then decided to join the ranks of derelicts and drunks. T-Man showed us it pays to try harder the second time around, and the whip scars show it. Bob's motto-"two beers and the world's mine!" B.J. insured the entire menagerie remained honest. Jimmy showed us how much fun it was to go through twice. Tony continued to amaze people with his eloquent speeches while Chris was the only one who could understand them. Smack was famous for his luck and coordination in walking up stairs and tripping over lines on the sidewalk. Uncle Mike (alias Fleetfoot) tried to take care of us but I think it affected his mind. Ted finally found out how to get along with the TD. Avoid them. We hope Joaquin will remember his many friends when he takes over Latin America. Our token proved that black may not be beautiful but a black tuna is great for morale and spirit. Cary proved he could shoot holes, while Bobby showed us how to run through them. Stick was our first air borne-ranger thanks to his pal Billy. Ray broke boards and managed to talk with his foot. Mex and George led the 31st Plebe Pursuit Division. Sweet Sweet continued to wrestle. Kai showed us how to Suma wrestle. Marc cried "Van" while Mike helped get things off to great starts at Navy. Bernie prefers the two wheel type of transportation as L.D. bounced across the plain. PJ and Chris kept the slopes safe but we'll never know how.

F-1's class of 75 may have departed the reservation, but our past remains for all to see and emulate. Whether it was parties, TV, Coffee Call, athletics or spirit, we were the best. Let them try to be as good as we were. Until we meet again friends, Later.
© USMA Class of 1975
Powered by ZENFOLIO User Agreement
Cancel
Continue