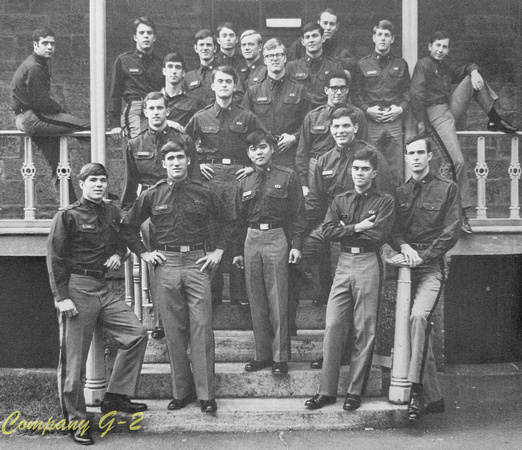 Since the beginning, G-2 kept on truckin', though constantly blinded by the sun reflecting off the "Alpine slope." As the battle line formed, we numbered 33 strong, but suffered heavy losses during the first couple of charges, with Ranger Mo and M-rak going down fighting and Grandma Gay just goin'. Now we stand at 21. Our first after taps battles found Toni a near fatality, and Noodles and DeTata behind 6th floor enemy lines, camouflaged in barracks bags and shoe polish. In the spirit of HENREEE!!, we even celebrated Paul's sister's birthday. Losses in the homeland began as Doug's girl rocked the 'boat', followed close order by Pheeel, Ace, and Bart. However, Bowlegged Boyd and Tommy maintained their girls through the duration with Pinapple picking up one along the way.

Plebe year ended with the victory party at Sam's place (Quarters 101). Then began the reign of King Richard, no late lights, and Roadguards leading the hockey games in the hallway.

Our year of the commitment began with late evening PT runs to flirty led by Klem and Tree with 'Algonquin' held captive in a parked car. Patricio's barber shop kept the soldiers battle-ready, while Ace was jumping behind enemy lines. Cravinski, our swift footed messenger, carried our academic strategy to our special rugby forces of Max, Bart, Cherry, and PK, as smiling-Lenny kept up the morale of the troops.

Our final year of conscription was led by Spix, who, after battle-fatigue, took R&R. The invasion of the Walter Reed nurses was contained by heroic actions of Uncle Al and others. Our siege of the castle across the river was no less successful. With victory within our grasp, we are almost ready to stack arms and crawl under our green girls, but wait . . .
© USMA Class of 1975
Powered by ZENFOLIO User Agreement
Cancel
Continue