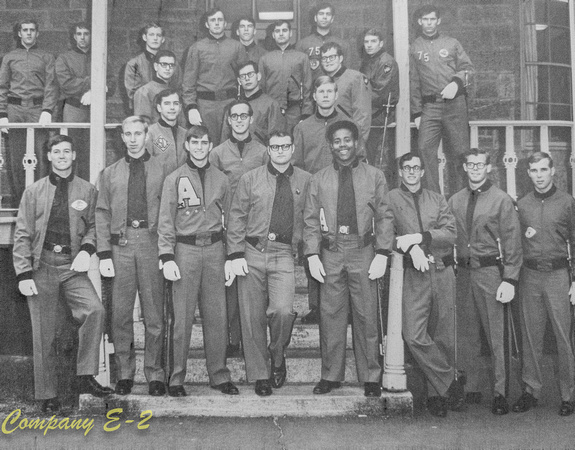 The dogs look back fondly on our four years . . . A Christmas party Yearling year brought us together for anywhere from 14 hours to four months . . . Kins and Chas were the heroic Century men that led the way . . . Buck led us too, a unique quality for a striper . . . So did Penny, whose wit and wisdom brought the company through . . . Steve, walking around like a drill sergeant, loving woo-poo and Dennie, but hating people; Keith, who pulled us through third detail, Timmy chose Marines over Army, still an honorable profession . . . T.C. just squeaked on by in his TR-6.. Whis got Lou-lou and stripes but not his stars . . . Bozo got stars and stripes and a new sliderule. . . Bill, our bag-artist Top still managed to excel . . . Deck and Big "C" were our biggest -- in both body and heart -- Quaff Ale . . . Mel got Al, Pat got Janelle and Dave got Sandi . . . Jeff got Patti and stripes . . . Kootch added color to the company and our ring banquet . . . Mike sang while Pat kicked and chopped . . . Dyker played handball and stayed pro . . . Steve got Susie, George got his letters . . . Wayne ran his own HRT program . . . Firstie year continued our camaraderie with "THE HOUSE" and the obtainment of Jace, our company mascot . . . a final thought goes out to Coach, Mike, Dan, Jimbo, Dennis, Krames, Teeps, Goose, and Kit . . . We came in strong and left stronger.
© USMA Class of 1975
Powered by ZENFOLIO User Agreement
Cancel
Continue