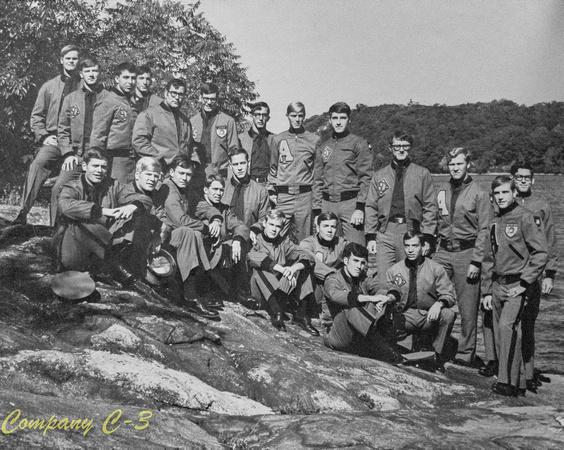 Coming to the Fightin' Cocks after Beast we soon learned to fight the TACS and the Dean as well as on the fields of friendly strife. While the Weasel would go after anything in a skirt, Truck was the uncontested king of the TV room. Tom and Ken spent their time with visions of June week weddings. Charlie finally got to take weekend in October of firstie year and Matt enjoyed the TAC, Saturday mornings and the demos that came down on Monday. P.E. had one helluva slapshot but always choked in front of the net. Buddy was the only manager in history who could do his duties from the rack while Trent grew gills after four years in the pools. Then there was Harry, who finally found happiness at Mt. St. Mary's. The Judo twins, Brad and Bruce, went every where together while after four years Martin remained his own man. Tater and Greg loved horses but liked to party more. Bill, Straw and Hank couldn't be stopped when it came to hoops and Barry gave up sure fame and fortune with his guitar to stay with us. Chumley came late but soon learned the Cock party spirit. Wrestling, Judo, Soccer -- Steve did them all at 100 m.p.h. The class hive, Tom kept the company grade average respectable while Wade could always be counted on for a picture or popcorn. Leo and Denny liked Saturday nights, booze and the hops while late nights and sleepless nights seemed to follow Dennis. Bill, "Right On," always did things his way -- and only got caught once. Actor and singer, all the world was a stage to Mike. Four years was a long time, but through it all, the Cocks took it all with a spirit matched by few.
© USMA Class of 1975
Powered by ZENFOLIO User Agreement
Cancel
Continue